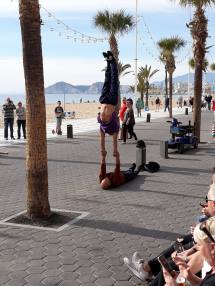 Mention the word ‘Benidorm’ in the course of a holiday conversation and you are usually met with a general distain and snobbish disgust with comments such as ‘Blackpool in the sun’, ‘high rise blocks’, ‘Brits abroad’ and other derogatory comments usually from those that have never been to the resort and just compare it to the TV programme.

I couldn’t stand the programme ‘Benidorm’ and thought it was tacky and as funny as Mrs Brown’s Boys (which I find as funny as having diarrhoea). It’s clearly put the resort on the map though and it hasn’t done the resort’s trade any harm.

It is like comparing Manchester to Coronation Street, and believe me there is no comparison there whatsoever.

You can find the various stereotypical images to match the downmarket images that many people have in mind around the New Town set a block away from Levante Beach around ‘English Square’ if that’s what you want, but there is another side to Benidorm in the Old Town that is a revelation.

I hadn’t been to Benidorm for about 20 years on a lad’s holiday and I can’t remember much about it, so I was happy to go with an open mind and explore the Old Town to see what it had to offer.

My first introduction to the Old Town was on the evening of Friday 21st December when I found my bearings and took a slow stroll down the main thoroughfare locally known as ‘Walking Street’, which was captivatingly lit up with traditional Spanish Christmas decorations and was busy with locals socialising and browsing around the many shops that line the main street and the labyrinth of side streets, cafes and tapas bars that can be found nearby.

I caught the first of a few stunning sunsets over Poniente Beach before adjourning to a nearby bar for a couple of local cervezas to refresh myself after a day spent travelling. Being able to sit al-fresco on a terrace overlooking a busy square listening to various traditional Christmas songs played by George Michael and Mariah Carey over the loudspeakers nearby while supping a beer made this Grinch almost feel festive.

I spent a few days on the approach to Christmas relaxing and exploring the Old Town and I found a few welcoming eateries and bars where I could get to meet a few of the expats and get a glimpse of the truth behind the facades that popular programmes such as ‘Bargain Brits in The Sun’ portray.

It was interesting to note that this time of year is popular with the travelling community who tend to gravitate to the various campsites nearby and bring their own unique ways of living to those who would prefer a quiet life without the disruption and anti-social behaviour that follows these creatures wherever they go.

I met some unpretentious, pleasant and friendly folk largely from the North West of England who have relocated to Benidorm to open bars and chippies and have formed a real community spirit and made sincere friendships together.

A special mention here goes to a couple who have opened up a chippy named ‘Northern Sole’, where Cazzie, who is an avid animal lover, arranged a fund-raising effort to have her hair shaved on New Year’s Eve for the local horse sanctuary with the hair being donated to a cancer care charity that creates wigs for women and children.  Cazzie aimed to raise €1,000, although the local British bars, hair salon and chef at her outlet who donated her tips for the whole of December managed to more than treble this target. Cazzie even puts any tips given to her towards this sanctuary, which I find quite touching given that this venture for her is in its infancy and this money could be reinvested in to her enterprise. I enjoyed a few meals here and the food is delicious.

Christmas Day was quite surreal insofar as spending the morning having a gentle stroll down the promenade along Levante Beach after breakfast at the hotel and seeing dozens of mobility scooters zipping along by pensioners wearing Santa hats, people drinking champagne on the beach wearing Santa hats and everyone else wearing festive outfits and milling about as if it was a summer’s day back home apart from the (Spanish) locals who stood out like sore thumbs wearing what we would describe as winter attire.

I eventually found my way along to the legendary Tiki Beach bar and spent the day sitting on a bar stool overlooking the beach listening to live rock music and having a few beers in the sunshine which broke through the hazy start towards 2pm. It was about 19c in the shade and it hit 21c on Boxing Day, although it was chilly at night with temperatures ranging between 8c – 11c.

Tiki Beach has attained its legendary status and popularity due to its prime location by the beach with live music and party tunes loudly playing around the vicinity with a circular bar manned by slick professionals selling cheap drinks. It is the perfect location to watch the world go by and to see pensioners sitting in their scooters wearing festive attire and hats drinking wine from their baskets, acrobats performing on cue outside the bars and hustling for tips, clowns dancing with strangers wearing Santa hats and the hourly tourist train passing by on the same promenade where the passengers and punters all wave at each other was entertaining and different to what I am used to! The promenade is also shared by motorists, pensioners on scooters, pedestrians, Police patrols and delivery drivers so it’s an accident waiting to happen.

The entertainment during the day was just a preliminary to enjoying a T-bone steak later that evening in an Argentinian Steak House in the Old Town where the owner of Coopers Bar opposite had kindly arranged a slot for me the night before. This steak was cooked to perfection and was delicious, with no uplift on the normal prices and hit the spot.

I adjourned to Coopers Bar afterwards, ordered another beer and sat down only to find a couple of lasses racing mobility scooters around the side streets like they had stolen them (because they had – the keys were left in them!). They were taking turns flying up and down the street against each other, around each other and doing U-turns on the side streets like true professionals while people were sat outside drinking and watching in stunned amusement.  I couldn’t help but have my photo taken on one after they had finished their racing, although that’s as far as I went as the batteries had taken enough of a hammering!

The rest of the holiday was spent primarily around the New Town with a lad from the hotel where we drank at Tiki Beach by day and saw some live entertainment at one of the main bars around the strip by night.

It’s worth noting that the streets around the New Town are largely deserted after 1am and I had heard of a couple of cases first hand of attempted muggings for watches and bags, with prostitutes plying their trade as well. There isn’t much of a Police presence either so I would recommend finding a taxi once you’re ready to leave and vacate the area as soon as possible.

I had also heard of pickpockets out and about during the day with people losing passports and spending money at the airport even before their holiday had started, and you will see pea-men on Levante Beach with an audience that is part of the props to attract the gullible tourists.

Benidorm left a lasting impression on me with spectacular views, pristine beaches and streets, a warm welcome everywhere and a far cry from what anyone would expect with the weather being a bonus as it’s a gamble when you’re only flying 1,200 miles as the crow flies.

You would never regret spending Christmas here and I would recommend it to anyone.