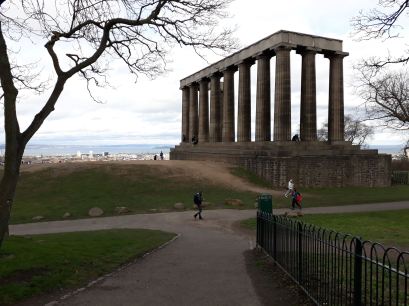 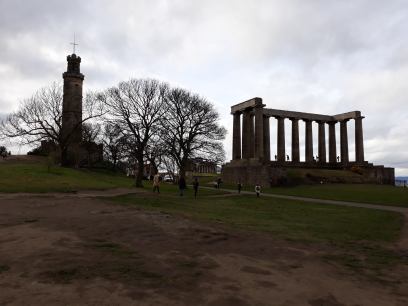 Nelson’s Monument and the National Monument

The National Monument of Scotland on Calton Hill is Scotland’s national memorial to the Scottish soldiers and sailors who died fighting in the Napoleonic Wars.

It was designed from 1823 – 1826 by Charles Robert Cockerell and William Henry Playfair.  They were some of the greatest Scottish architects of the 19th century and it is modelled on the Parthenon in Athens.

It was intended, according to the inscription, to be ‘A Memorial of the Past and Incentive to the Future Heroism of the Men of Scotland’.

Work began in 1826 to build it and was left partly unfinished in 1829 due to a lack of funds. It was and remains referred to as ‘Edinburgh’s Disgrace’ in light of the fact that it was never completed.