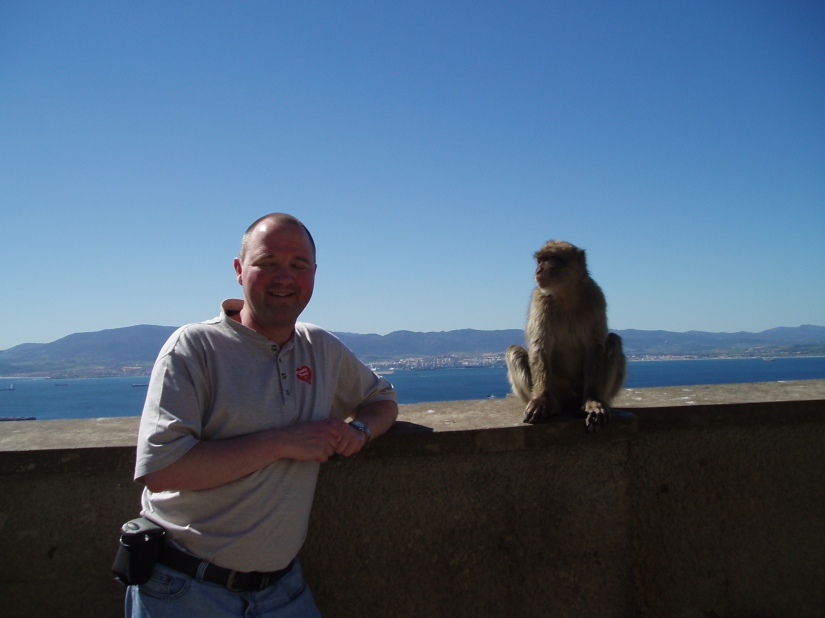 GIBRALTAR AND THE APES

A friend of mine relocated from the Isle of Man a few years ago to live in Southern Spain and works part-time in Gibraltar, and a random chat earlier this week gave me the inspiration to ghost write a blog for her website – http://www.alisoninandalucia.com.

I have visited Gibraltar a couple of times, the last time being in 2009, although I remember it well and it was an easy one for me to write.

Here are my musings, which may be edited by Alison before she publishes it;

Living in beautiful Andalucia and working in Gibraltar brings its own unique contrasts, least of all the antics of the macaques otherwise known as apes which roam freely primarily around the Upper Rock although they occasionally stray down in to ‘Town’.

It appears that the apes originate from Morocco and are the only wild monkey population in Europe, with legend saying that Gibraltar will only hold under British rule so long as the apes exist on the Rock. The population dwindled to only 7 monkeys in 1942 during World War II, resulting in Winston Churchill boosting their numbers immediately by seeking reinforcements from Morocco and Algeria by virtue of this traditional belief.

Numbers are now estimated between 200 – 300, so although we now have a healthy number of apes it brings its own problems.

Gibraltarians have their own patois (‘lingo’), so they are invariably referred to as ‘monos’ (Spanish for monkeys). In fact, finding anyone in the local shops that can speak English in a British Territory is an issue in itself, although I digress!

My commute from Sotogrande involves a short drive to La Linea where I rent a secure parking space, followed by a 35-minute walk through the Frontier and passport control to Casemates Square and on to Main Street to work.

Incidentally, La Linea is literally interpreted as ‘The Frontier’ and is a town that may have seen better days although I doubt anyone could remember them. Nevertheless, you wouldn’t bother trying to drive in to Gibraltar due to the continual issues revolving around the Border, hence why I simply rent a secure parking space and just walk to work.

The monkeys generally stay around the Upper Rock which is a nature reserve where they are free to roam, and it’s fair to say that they are the biggest tourist attraction here. They are inquisitive, brazen and generally harmless but you have to keep your wits about you as they are adept at opening handbags and backpacks looking for food and are not shy!

They can be seen from time to time at the back of Casemates Square, which has various restaurants and cafes and where there is food the monkeys are never too far away.

Restaurants and cafes often have heavy doors with notices saying ‘Keep Closed’ in various languages to stop the monkeys coming in, but that doesn’t stop tourists chatting with the door open and monkeys darting in to jump on the tables helping themselves to leftovers and open freezers to help themselves to ice creams. They aren’t fussy eaters and staff usually have brooms close to hand to chase them out, which is funny to watch and I’m sure it isn’t part of the job description!

I have recently seen them stroll down Main Street, much to the amusement and delight of the tourists although the shopkeepers and residents see them more as a nuisance.

Nevertheless, they are integral to Gibraltar’s rich and varied culture and history and I think everyone has a soft spot for the monkeys knowing that the Rock wouldn’t be the same without them.